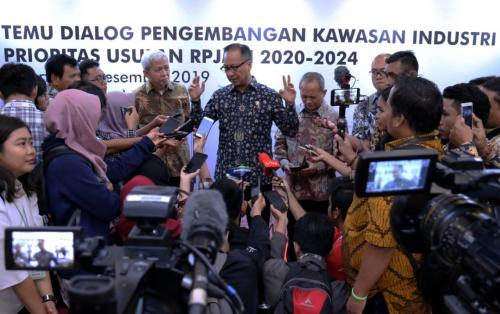 JAKARTA - The government is currently focusing on developing industrial areas to boost investment and the national economic growth.

“This strategic measure is in line with Law No. 3/2014 on Industries, because industries must be based in specially-designed areas,” said Industry Minister Agus Gumiwang Kartasasmita at the Dialogue on the Development of Prioritised Industrial Areas event in Jakarta, Tuesday (10/12).

“Out of the 103 operational industrial areas, 58 are located in Java,” Mr Kartasasmita added. 33 are located in Sumatra, eight in Kalimantan, and four in Sulawesi.

To drive the growth of industrial areas, the government is also committed to creating a conducive investment climate in order to gain investors’ confidence.

“Thus, we need comprehensive government policies through both fiscal and non-fiscal incentives… We appreciate a number of regional governments who have recommended more industrial areas in their regions,” said Mr Kartasasmita. (MS)