ASSA revenue and profit both increased in first quarter 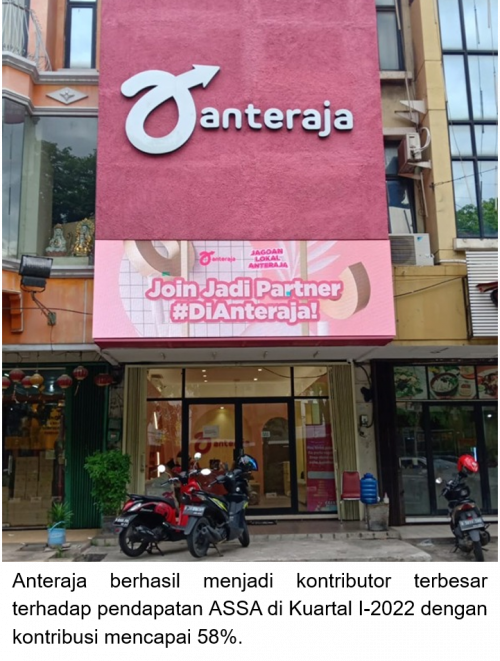 JAKARTA - PT Adi Sarana Armada Tbk (ASSA) consistently recorded over 50% revenue and profit growth by the first quarter of 2022. ASSA's revenue until March 2022 was recorded to have increased by 59.5% year on year (YoY) or recorded at IDR1.5 trillion from the previous IDR963.2 trillion in Q1-2021.

Meanwhile, at the bottom line, ASSA recorded a net income attributable to the parent company of IDR72.9 billion or growth of 123.5% compared to the same period in 2021 which was recorded at IDR32.7 billion.

President Director of ASSA, Prodjo Sunarjanto said, "During the first three months of this year, we are grateful that we were still able to record a performance of above 50% with each revenue and profit still growing significantly compared to the same period in 2021. ASSA's performance in the first quarter was still driven by delivery express business line (Anteraja), which contributed to ASSA's revenue reaching 58%.

By March 2022, ASSA’s revenue was dominated by Anteraja with a contribution of IDR899.1 billion or growth of 129.7% compared to the same period in 2021 which was recorded at IDR391.5 billion. Then from the car rental business, it managed to record revenue of IDR401.8 billion, auction business of IDR32.1 billion, buying and selling of used vehicles of IDR161,5 billion, while logistics services contributed IDR41.7 billion to ASSA's total revenue in the first quarter 2022. (LM)