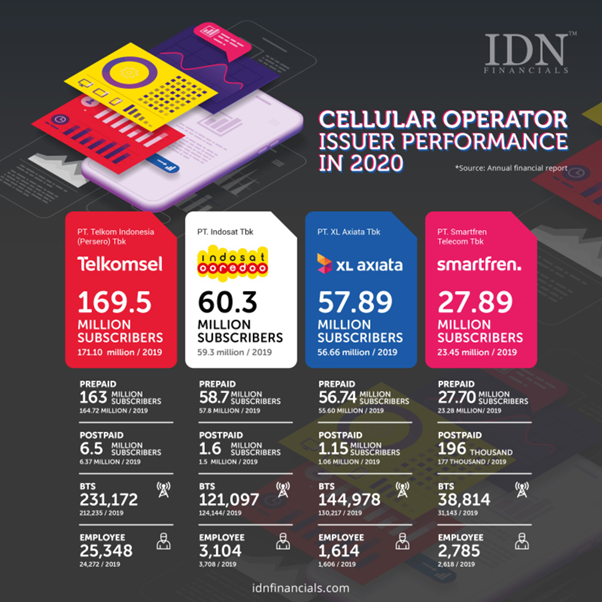 In 2020, there are only five cellular operator issuers in Indonesia: Telkomsel, Indosat Ooredo, XL Axiata, Smartfren, and Hutchinson Tri (3), even though there were two other issuers in the field only five years ago. However, the competitive and demanding market encouraged efficiency in this industry to provide a better value and service to customers.

The global pandemic in 2020 impacted many business sectors worldwide, both positively and negatively. For the cellular operator issuers in Indonesia, the impact is on a positive note. Overall, the number of subscribers of each issuer increased by 1-3 million compared to the previous year.

We can also see an increase in revenue by around Rp1 trillion in 2020, and the net profit increased by more than Rp2 trillion. Most of the revenue sales came from data services at the value of Rp59.50 trillion. This phenomenon happened because of the increasing demand for internet data as people do more activities online during the pandemic, especially in working and learning. Telkomsel provides different products in all segments, such as Telkomsel Halo, Telkomsel PraBayar, and the first digital provider in Indonesia, byU.

In the second place, Indosat Ooredo from PT Indosat Tbk (IDX code: ISAT) reported 60.3 million subscribers, or an increase of 1 million subscribers from the previous year. Nearly 97.5% of those subscribers use prepaid services, and only 2.5% uses post-paid services. Interestingly, this Malaysian-based company reduced their number of BTS by 3000 towers and employees by 600 people.
From the revenue sheet, Indosat reported Rp27.92 trillion revenue in 2020, increased slightly from the previous year, yet the net profit dropped to Rp716.71 billion loss. For the same reason as Telkomsel, Rp19.72 revenue was generated from data services, while voice service decreased slightly under Rp2 trillion. Indosat Ooredoo is known for its IM3 brand.

XL Axiata from PT XL Axiata Tbk (IDX code: EXCL) follows Indosat tightly with 57.89 million subscribers, of which 56.7 million subscribe to prepaid service. Overall, XL Axiata shows over 1 million up in subscriber numbers and almost 15.000 BTS towers.
The revenue also is very competitive to Indosat Ooredo at Rp26 trillion, which shows a minor increase from the previous year. Following the trend, most revenue also comes from data service at Rp21.38 trillion, or increased over Rp2 trillion, while voice service generates less revenue than the previous year. XL Axiata reported Rp371.59 billion profit in 2020, a decline of almost half of 2019. XL Axiata offers a wide range of products, such as XL, XL Prioritas, even home broadband XL Home.

Last but not least, Smartfren from PT Smartfren Telecom Tbk (IDX code: FREN) gained 27.89 subscribers in 2020, a significant increase of more than 4 million subscribers than the previous year. Almost all subscribers use prepaid service, as only 196 thousand use post-paid service. Smartfren also built 7000 more BTS towers to accommodate this increasing demand.

In 2020, Smartfren reported Rp9.40 trillion revenue, which increased moderately from Rp7 trillion the previous year. From this number, 91% of the revenue was generated from data services and increased Rp2 trillion from 2019. Smartfren reported a net loss at Rp1.52 trillion, though this number is better than the recorded loss in the previous year at Rp2.18 trillion. Smartfren is famous for its affordable data plans. (KD)