How Well the Government-owned Banks Perform during the Pandemic? 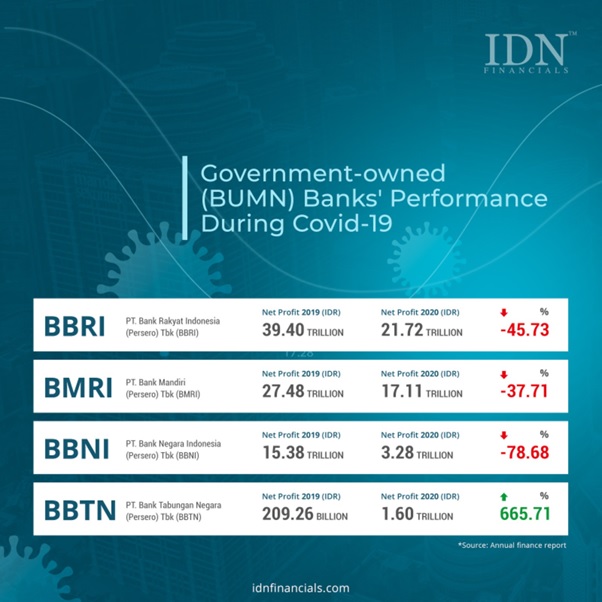 Since the pandemic hit the world in early 2019, all sectors have been affected in various degrees, including financial and banking services. This effect is considered indirect because banking services can be provided remotely. Nonetheless, the banking sector is affected by their linkage with real sectors as the provider of payment, savings, credit, and risk management services.

The state-owned banks in Indonesia also face the same challenges. Three out of four banks reported a steep decrease in net profits in 2020, compared to the previous year. PT Bank Negara Indonesia Tbk or BNI reported the highest decline at -78.68%, followed by PT Bank Rakyat Indonesia Tbk (BRI) at -45.73%, and PT Bank Mandiri Tbk (Mandiri) at 37.71%.

Exceptionally, PT Bank Tabungan Negara Tbk (BTN) was the only government-owned bank that reported a 665% net profit increase during the pandemic, driven by their housing and property sectors. However, BTN made the least amount of profit among the other banks, which was only Rp1.60 trillion, while BRI generated the highest amount of net profit in 2020 at Rp21.72 trillion, Bank Mandiri at Rp17,11 trillion, and BNI Rp3,28 trillion.

BTN Third-party funds soared almost 25% from the previous year, as the highest percentage increase in 2020 at Rp280 trillion. Over again, this is the least amount in this segment because both BRI and Bank Mandiri acquired more than Rp1,000 trillion of third-party funds, while BNI at Rp680 trillion.

On the other hand, BNI revealed the highest percentage increase of total credit at 5.29%, BNI and BTN inclined slightly at around 1.5%, while BTN indicated a downward trend at -1.77%. Related to credit, all four government-owned banks have restructured their credit in 2020 at the range between 20-27%. This figure is relatively lower than some other countries that reached 50% of the total credit.

One major concern related to a pandemic is the termination of employment due to the lack of revenue and business in general. BRI President Director guaranteed that no employee would be let go because of the pandemic, but reported to employ 3,436 fewer employees in 2020 than 2019. Bank Mandiri and BNI also reported employee reduction at 818 and 423 people, while BTN only shows 9 fewer people than the last year. However, this number can be affected by various factors. (KD)