Indonesia’s Population Up by 3 Million in A Year 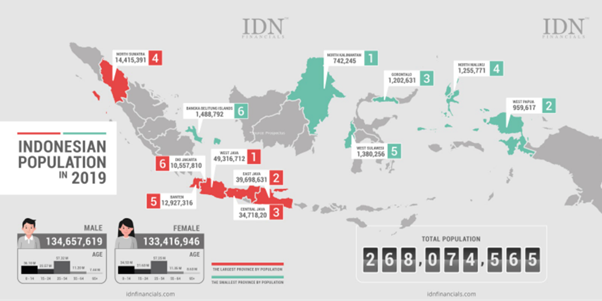 With a steady growth rate of 1%, Indonesia’s population reached 268 million people in 2019, compared to 265 million in the previous year. Java island was still the densest region this year, with five out of six provinces on the list of the most populous provinces in the country.

Six provinces on the list of the most populous province in 2019 didn’t move from their positions in 2018. The list started with West Java province with 49.3 million residents, increased by a whopping number of 632.000 people from the previous year. This number was also the biggest growth compared to any other provinces in Indonesia.

In total, these top six most populous provinces contributed to 60% of Indonesia’s population in 2019.

On the other hand, the six least populous provinces are North Kalimantan (742.000 people), West Papua (959.000), Gorontalo (1.2 million), North Maluku (1.25 million), West Sulawesi (1.38 million), and Bangka Belitung (1.48 million). These provinces also remain in their position from the previous year and contributed only 3% of the total of Indonesia’s population.

That being said, the other 22 provinces in Indonesia are home to 99 million or 37% of Indonesian people.

Gender-wise, Indonesia is embodied by slightly more males than females, with only 1.2 million people difference. Males also dominated the age groups of children, youth, and the productive age. Statistic showed that there are 1.5 million more boys than girls under 14 years old. There’s no significant difference between the numbers of young men and women age 14-24 years old, and even a smaller gap between both sexes in productive age of 25-54. Meanwhile, there were more elderly women than men in the senior citizen age groups, especially over 65 years old. (KD)