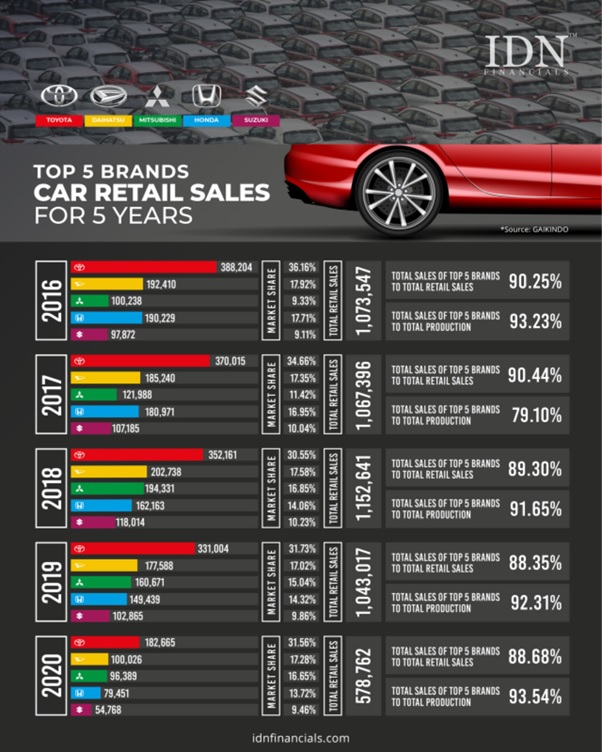 Indonesian people are fond of Japanese technology, including the automotive. Five brands from the Rising Sun country dominated the Indonesian car market, outdid the other well-known brands from the United States or European countries. These top five Japanese automotive brands are Toyota, Daihatsu, Mitsubishi, Honda, and Toyota.

Toyota Motor Corporation, an automotive company established in 1937, recorded the highest sale in the Indonesian car market from 2016 to 2020. In the five years, Toyota alone consistently owned more than a third of the Indonesian car market share, with the highest point in 2017 at 36%, while the lowest was in 2018 at 30%. In 2020, Toyota sold 180.000 car units, only half the number of the previous years, but they kept the 30% market share. Two flagship Toyota car brands, Avanza and Agya, were their best-selling in Indonesia, and the other well-known Toyota car brands are Innova, Fortuner, Yaris, Alphard, and Rush.

The next major brand is Daihatsu, a subsidiary of Toyota Motor Corporation. Compared to its holding company, Daihatsu car brands owned 17% of the market share with their flagship cars Xenia and Ayla. In 2020, Daihatsu sold 100.000 car units, decreasing sharply from the previous years when they could sell 160.000-200.000 units annually.  Daihatsu Sirion, Sigra, and Granmax are the other popular brands from this company.

The next on the list is Honda Prospect Motor. Even though this brand dominates the Indonesian motorcycle market, Honda has to be satisfied to be in fourth place in the car market. The trend during these five years is declining for this company. It started with a 17% market share in 2016 but ended up with 13% in 2020. In 2020, Honda barely sold 80.000 car units, only half the number of the previous year. Popular Honda car brands in the Indonesian market such as CR-V, Civic, Brio, and Mobilio.

Meanwhile, Global Suzuki which was founded in 1909 is in the bottom position for those five consecutive years. This brand hangs around the number 10% of market share in five years with no significant changes in sales, unless in 2020, which happened to all companies in this industry. The most sales were in 2018 when they sold 118.000 car units, and the lowest was in 2020 with only 54.000 units.

These top five car manufacture rule around 90% of total retail sales and total production for five years, and is predicted to keep dominating Indonesian car market in following years. (KD)