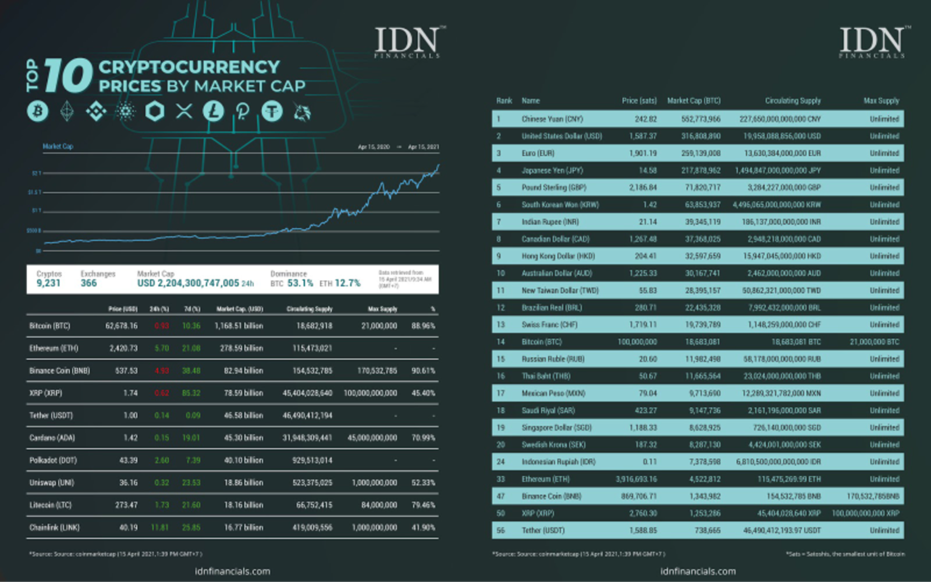 Cryptocurrency has become a hot topic among investors as the price was skyrocketing to an all-time high at around USD63,000 or IDR924 million in April 2021. This shocking number triggered discussion between cryptocurrency enthusiasts and critics about how is the potential of Bitcoin and the other cryptocurrency to be an investment instrument and its volatility.

If you’re not familiar with Bitcoin or cryptocurrency in general, it is a digital currency that uses an online ledger with strong cryptography to secure online transactions. Some people utilise cryptocurrency to buy goods and services as regular currency, but many people find interest in these not-yet-regulated currencies to trade for a profit with speculators. Since its launch in 2009, Bitcoin (BTC) as the first and the most valuable cryptocurrency reached its all-time high price at USD63.000 in April 2021. This triggered the value of other cryptocurrencies to increase as well.

Overall, there are 9,231 cryptocurrencies in the market with a total market cap of USD2,204,300,747,005. This value is dominated by Bitcoin (BTC: 53.1%) and Ethereum (ETH: 12.7%). For a cryptocurrency like Bitcoin, market capitalization (or market cap) is the total value of all the coins that have been mined. It's calculated by multiplying the number of coins in circulation by the current market price of a single coin. Other than these two prominent cryptocurrencies, there are other eight on the top ten cryptocurrencies by market cap list. Let’s take a look.

The 10th position is Chainlink (LINK), a decentralized oracle network, valued at USD16.77 billion with only 41.9% circulating supply. Followed by Litecoin (LTC), one of the early altcoins which started in 2011, valued at USD18.16 billion with slightly under 80% circulating supply. Interestingly, LTC has a relatively higher price (USD273 each) compared to the other coins with a similar market cap. In 8th place, Uniswap (UNI) reported a USD18.86 billion market cap at 52% circulating supply. UNI is a fully decentralized protocol for automated liquidity provision on Ethereum which launched in 2018.

Ripple’s XRP is in 4th place with a USD78.59 billion market cap, even though they have released only 45% of its maximum supply. Binance Coin (BNB), a cryptocurrency issued by Binance as the world’s biggest bitcoin exchange and altcoin crypto exchange in the world by volume, is on the top three with a USD82.94 billion market cap. BNB is getting more popularity among traders, but it has already released more than 90% of its max supply.

Ether (ETH) is consistently behind Bitcoin on the list with a USD278.59 billion market cap or around 12% of the total cryptocurrency market cap. ETH is a native altcoin in a blockchain platform called Ethereum. ETH doesn’t have max supply because of its deflationary mechanism that allows its demand to be always higher than supply. At the top of the list, Bitcoin (BTC) as the oldest and the most prominent cryptocurrency own 53% of the market cap with a value of USD1,168.51 billion. BTC itself has released 88.96% of its max supply.

To see the significance of BTC, let’s compare this coin to fiat currency, for example to the Chinese Yuan and US Dollar per April 2021. Chinese Yuan (CNY) recorded the circulating supply of 227,650,000,000,000 CNY, which means 552,773,966 BTC is needed to buy all the circulating Yuan money. This value is also the highest compared to the other fiat currencies.