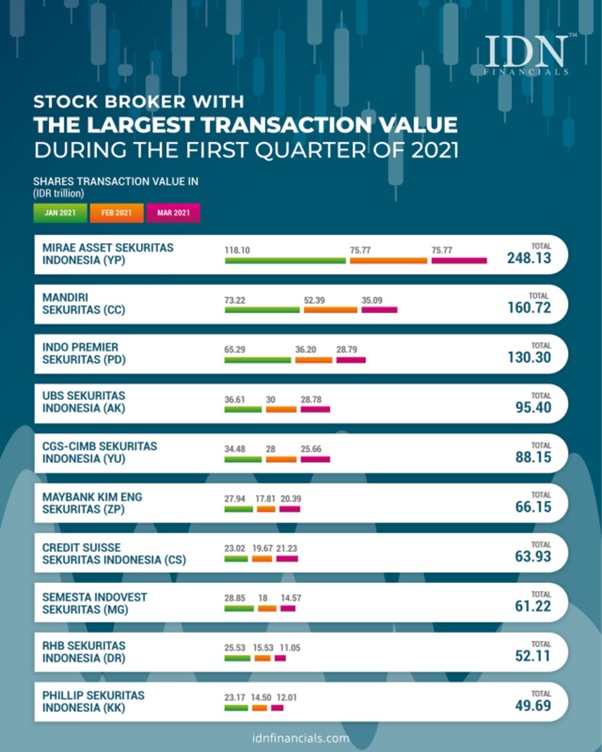 As millennials and younger generations become more aware of the importance of having investment, buying shares in the stock market also has become more popular. This investment tool is considered less risky than the high-flyer investments, like options or futures.

As per rules, investors can’t do trading activities directly because only the registered stockbroker companies are allowed to buy and sell in the stock market. These brokers would be the bridge between investors and a stock market in the trading process. That’s why choosing the right stockbroker can be a crucial step for every investor.

Let’s take a look at the top ten stock broker companies with the largest transaction value in the first quarter of 2021.

Mirae Asset Sekuritas Indonesia (YP) is consistently being on the top of the list for the first three months in 2021. With a total transaction value of almost Rp250 trillion, this South Korea origin company has almost twice as much as their biggest local competitor Mandiri Sekuritas (CC) that reported Rp160 trillion. Mandiri Sekuritas is a business unit of the state-owned bank, Bank Mandiri.

In third place, Indo Premier Sekuritas (PD), the biggest private stockbroker in Indonesia, reported a total transaction value of Rp130 trillion. UBS Sekuritas Indonesia (AK) is next on the list with Rp95 trillion of the total transaction. This company is a part of UBS Group AG, a multinational finance company in Zurich, Switzerland.

Subsequently, CGS-CIMB Sekuritas Indonesia (YU) recorded a transaction value of Rp88 trillion in the fifth place. This company prides itself on its strong stakeholders and capital as a joint venture company between China Galaxy International Financial and CIMB Group Sdn Bhd ("CIMB") from Malaysia. Another Malaysia origin company is next on the list: Maybank Kim Eng Sekuritas (ZP) that reported a total transaction value of Rp66 trillion this quarter.

Lastly, Phillip Sekuritas Indonesia (KK) closed the list with almost Rp50 trillion of the transaction value. This company is a part of PhillipCapital that has a global network in 16 countries all over the world. (KD)