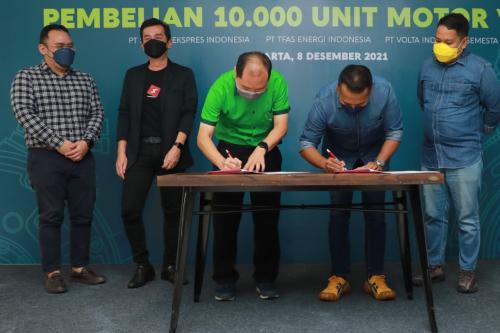 This collaboration is a form of SiCepat Ekspres innovation in selecting operational vehicles to deliver packages to customers. Murwanto, as Chief Operating Officer of SiCepat Ekspres explained, SiCepat does not only innovate in providing services and products, but also wants to play a role in protecting the environment, one of which is by using motorcycles that are free of carbon emissions.

“SiCepat chose Volta electric motor that uses a Battery Replacement System (SGB) as an operational vehicle to be more environmentally friendly. With the inauguration of this collaboration, through the signing of the cooperation document by SiCepat, TFAS and Volta, it is hoped that SiCepat can contribute to environmental sustainability, as well as closer cooperation between these three parties," said Murwanto.

In this collaboration, Tfas Energi Indonesia, which is a subsidiary of Telefast Indonesia, acts as a company that rents out Volta electric motorbikes to SiCepat as operational vehicles to deliver packages to customers while providing a positive impact on society and the environment, especially in the long term.